We're delighted to welcome Paul back after a successful exhibition in 2010. With the London Olympics upon us, we're incredibly excited to exhibit his observant works which detail the great host city in his own unique style.


London-born Paul Jack Hiles has always loved London; its history, diversity, culture, and the fact that it is continuously evolving. He's fascinated by its depth, perspective and scale and focuses on selected aerial views of the capital in order to highlight the medley of London life that its residents know and love, as well as the rich and complicated layout of the city.


The intricate nature of his work resonates with all Capital dwellers - the appeal in the detail, richness and scale. Hiles has painted and drawn parts of London since the early 1980s, regularly painting and sketching along Shad Thames, often found drawing by street light in the small hours of the morning. The works flow with Hiles' knowledge and love of the London landscape.


He loves the challenging task of creating large compositions, embellishing these with humorous stories, memories and bits of London history. Some events are taken from his own life and the lives of people he has admired or have influenced him in some way.


A perceptive viewer will be drawn into Paul's work, discovering quirky detail: Jack the Ripper hiding down a dark alley in Spitalfields, Boris on his bike next to City Hall or Anne Boleyn being executed on Tower Hill.


Hiles appears to twist and distort form whilst keeping the essence of London, its districts and landmarks. The foregrounds have more detail with the distance gradually becoming more simplified as one moves further away from the main focus of the work.


London offers inspiring aerial views of London, fulfilling Paul's dream of producing a whole series of exhibits of the capital. 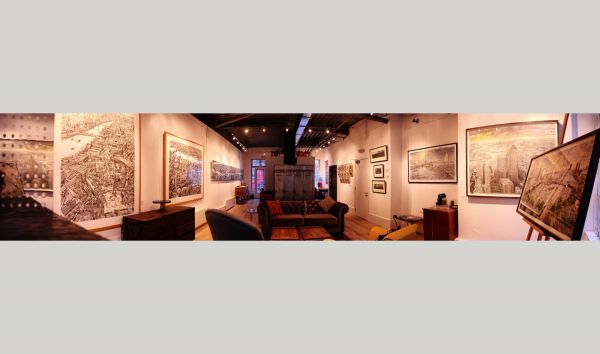